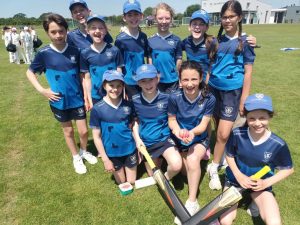 Our Year 6 girls won the regional ISBA Cricket Plate competition at Ashford Prep on Wednesday last week.    It was the U11A girls first ever IAPS cricket tournament with three matches in their section followed by the plate semi-final and then the final.  Mrs Hiscock, Head of Girls’ Games, commented, “I am incredibly proud of how the girls played.  They played brilliantly, held their nerve in some very close matches . . . we had catches, run outs, straight bowling and lots and lots of wickets“.  Well done to the team you played brilliantly!