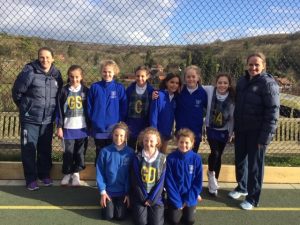 The Under 11 A team travelled to Caterham yesterday for a versatility tournament. We played nine matches and the girls had to move on one position after every match.

All nine girls played every position during the tournament.

Here are our results:

As you can see, we only lost one game during the tournament. We scored over 30 goals in nine short six minute matches and only had eight goals scored against us. The girls finished fourth – the points at the top of the table were very close! It is always difficult to see the third place team going to collect their medals knowing we had beaten them and the second place team collecting their medals knowing we had drawn against them! The winning team were the only team to beat us, so that didn’t feel too bad!

Well done to all of the girls. This is a lovely tournament to play near the end of the girls netball time at Micklefield as it is lovely for all of the girls to get the chance to play in all of the positions. My moment of the tournament was seeing Evangeline jumping for joy after scoring at least three goals in one of the matches. She has never played as a shooter in our matches so it was a lovely moment!